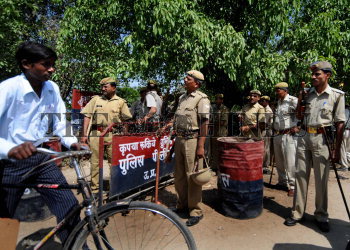 Caption : PILIBHIT,UP, 29/03/2009: Scene at the Pilibhit border on Sunday, March 29, 2009, day after Varun Gandhi , BJP candidate from Pilibhit surendered and subsequently sent to jail till Monday. More than 20 people were injured after police fired in air and lathicharged on them when they tried to attack the Jail where Varun is in custody. Photo:Rajeev_Bhatt