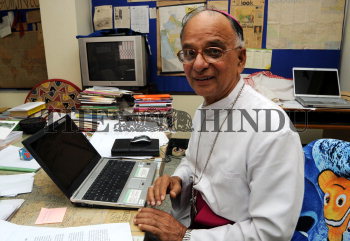 Caption : GUWAHATI 29-03-2009: (ARCHBISHOP GUWAHATI PREPARES POPEŌS SPEECH FOR GOOD FRIDAY) Archbishop of Guwahati Thomas Menamparampil prepares the Way of the Cross that will be used in Rome on this Good Friday, in his office in Guwahati on March 29, 2009. For two years in a row, Pope Benedict XVI has turned to Asia for the Way of the Cross which he will lead on Good Friday, April 10, in the Roman Colosseum. This is the first time an Indian Bishop is been given this kind of honor. The 72-year-old Archbishop is also the chairman of the Federation of Asian BishopŌs Conference Commission for Evangelisation. A member of several Vatican commissions, popular author and speaker, Archbishop Menamparampil have written on the sufferings of the millions of Dalits, thousands of persecuted and oppressed people in Orissa, Congo and Sudan, who are denied their rights and human dignity. Archbishop Thomas belongs to Menamparampil family of Pala,Kottayam district in Kerala. PHOTO: RITU_RAJ_KONWAR