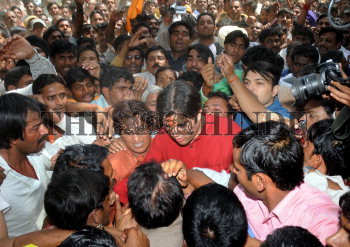 Caption : PILIBHIT,UP, 28/03/2009: BJP candidate from Pilibhit, Varun Gandhi being taken in judicial custody after he surrender on March 28, 2009, before magistrate at Pilibhit district court in Uttar Pradesh in connection with his objectionable statement against the minority during a public meeting earlier. He has been sent to judicial custody till Monday. Photo:Rajeev_Bhatt