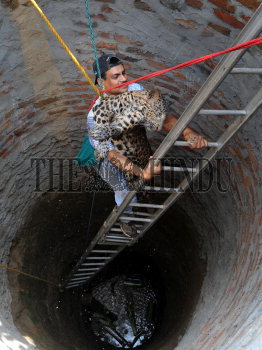 Caption : GUWAHATI„28-03-2009 (LEOPARD RESCUED FROM WALL IN GUWAHATI) Veterinary doctor Bijoy Gogoi takes out a leopard from a well in Sonaigali village in the heart of Guwahati on Saturday, March 28, 2009. The full grown female leopard falls in to a well, when it had come down in search of food. The leopard was later tranquilised by the zoo officials and taken to the Guwahati Zoo. This is the second leopard that has been rescued from this populated area in the city in a month. Earlier another leopard was rescued on March 15, 2009.Both the leopards came down in search of food and entered in this area. Due to rapid destruction of forest and illegal encroachment in the hills leopards are fast disappearing from the Guwahati city. No steps have been taken so far to protect this species by the Assam forest department and NGOs. PHOTO: RITU_RAJ_KONWAR