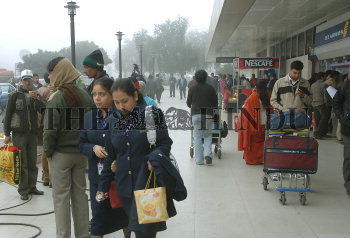 Caption : Chaos at the Departure Terminal: Dense Fog engulfed the area around airport which resulted to zero visibility resulting to delayed or cancelled departure and arrival of flights at Palam till about noon in New Delhi, on December 23, 2006. Photo: V_V_Krishnan