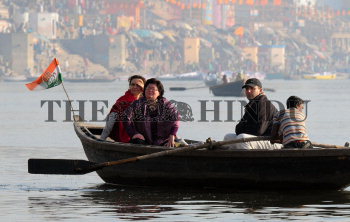 Caption : Picture for election page VARANASI, 27/03/2009 OFF THE ROAD: Strict vigil of the election commission has brought the campaigning chaos to about a nil making traditional poster banner war among the political parties disappear but there are few who know the trick, as one here a Congress party flag fluttering on the boat carrying tourists to a ferry on the riverfronts of Varanasi on Friday, March 27 2009. Photo: Akhilesh_Kumar