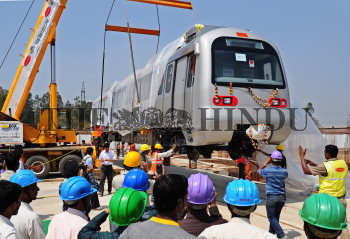 Caption : NEW DELHI, 26/03/2009: South Korean made Delhi Metro Rail's first standard gauge coach, which arrived from Mundra port in Gujarat on trailer, being placed on the track at the Mundka depot in New Delhi on March 26, 2009. Photo: S. Subramanium