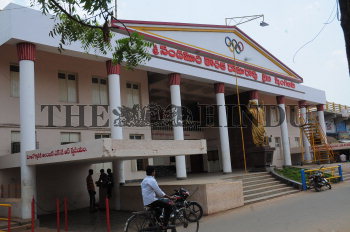 Caption : VIJAYAWADA , 23/03/2009: NTR Stadium in Gudivada in Krishna district with several facilities is a feather in the cap for the town. It was during the tenure of NTR as Chief Minister when he represented Gudivada in the State Assembly that the construction of the stadium began. Photo: Ch. Vijaya Bhaskar