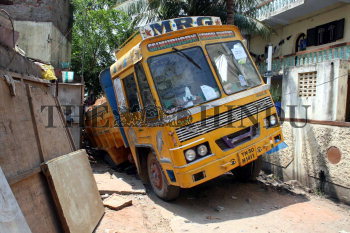 Caption : TAMBARAM, 20/03/2009: The mud-laden lorry that tilted to its right after its wheels were trapped on loose sand on Kulakkarai North Street in Kadaperi, Tambaram on March 20, 2009. A 22-year-old youth died when he was trapped between the lorry and an iron pole. The lorry was backing up and the victim was giving instructions to the driver when the accident took place. Photo: A. Muralitharan