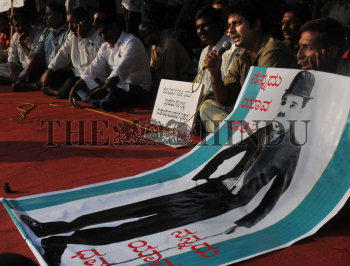 Caption : BANGALORE, 20/03/2009. Hemanth Hegde along with artists, writers and intelectuals staging a protest infront of Gandhi statue against the objections raised by some people against erecting a statue of Charli Chaplin's for the film shooting in Bangalore on March 20, 2009. Photo: K. Bhagya Prakash