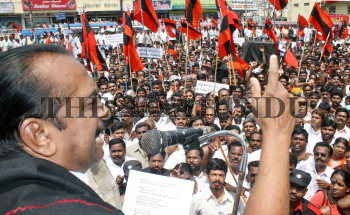 Caption : COIMBATORE 20/03/2009: MDMK general secretary Vaiko leads a demonstration in Coimbatore protesting against the detention of the Propaganda secretary of the party 'Nanjil' Sampath, film director Seeman and the President of Periyar Dravidar Kazhagam Kolathur T.S. Mani under the National Security Act on March 20, 2009. PHOTO:S_SIVA SARAVANAN