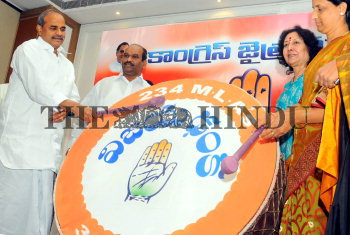 Caption : HYDERABAD:20/03/2009:ELECTION PAGES: Andhra Pradesh Chief Minister Y. S. Rajasekhara Reddy all smile while formally launching the Congress party election campaign by hitting on beat the drum during the press conference held at a five start hotel in Hyderabad on Friday. YSR is a 'Hero' of 2004 general election which brought Congress Party into power, is all set ready hit roads coming week and likely to reach voters of nearly 170 Constituency in the state. For the first time in 25 year, state is going to witness triangular contest in Lok Sabha and Assembly elections, scheduled to be held in two phases on April 16 and 23.. Photo: Mohammed_Yousuf