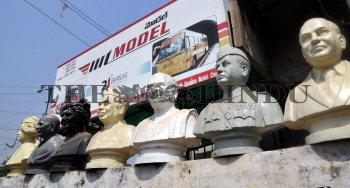 Caption : HYDERABAD, 19/03/2009: Bust statues of prominent National leaders are perched over the compound wall of a artist's studio at Sanjeevareddy Nagar in Hyderabad on March 19, 2009. Leaders of several parties had ordered them to be placed strategically at village and town squares, but as the Election Commission's Model Code came into effect, they abandoned collecting them, as they gather dust. Photo: P. V. Sivakumar