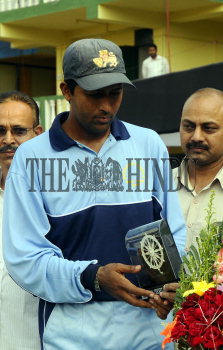 Caption : Bhubaneswar, Orissa: 18/03/2009: Wasim Jaffer, captain of West Zone cricket team, with the Man of the Match plaque awarded for his performance in the Deodhar Trophy final between East Zone and West Zone at Barabati Stadium in Cuttack on March 18, 2009. Photo: Ashoke Chakrabarty