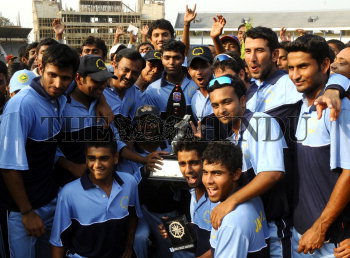 Caption : Bhubaneswar, Orissa: 18/03/2009: The West Zone cricket team members are jubilant after winning the Deodhar Trophy, defeating East Zone in the final at the Barabati Stadium in Cuttack on March 18, 2009. Photo: Ashoke Chakrabarty