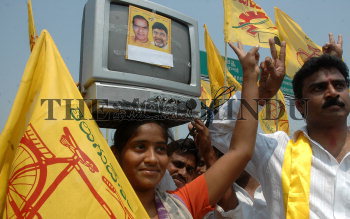 Caption : VIJAYAWADA,17/03/2009: A Telugu Desam Party activist displays a TV set to publicise about the party's promise of giving CTVs to below poverty line families if voted to power, during a campaign at Ranigarithota in Krishnalanka in Vijayawada on March 17, 2009. Photo: V. Raju