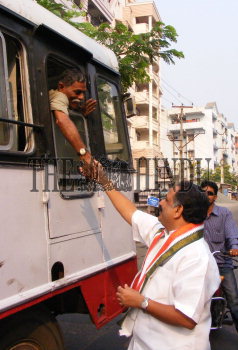 Caption : VISAKHAPATNAM, 17/03/2009: MLA Dronamraju Srinivasa Rao greets an RTC bus driver as a part of his campaign near Century Club in Visakhapatnam on March 17, 2009 though the Assembly tickets have not been finalsied. Photo: C.V. Subrahmanyam