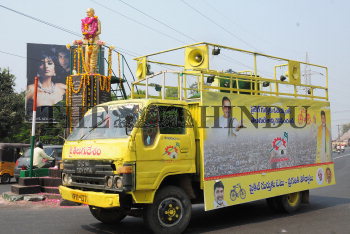 Caption : VIJAYAWADA,16/03/2009: A campaign vehicle of the Telugu Desam Party passes by a statue of Potti Sriramulu, who laid down his life sitting on fast-unto-death for a separate Andhra State, garlanded on the occasion of his birth anniversary on Monday at Prakasam Barrage in Vijayawada. The TDP, which stood by the united Andhra Pradesh slogan for long, has come out in favour of separate Telangana. Photo: Ch. Vijaya Bhaskar