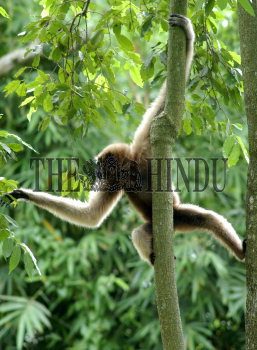 Caption : JORHAT, 16/03/2009: A Hoolock Gibbon at the Gibbon Wild Life Sanctuary in Jorhat district of Assam on March 16, 2009. The Assam Forest Department will start the massive exercise of numbering primates in Assam from March 17 to 21, 2009. Special training has also been given to the forest employees, members of the wildlife organizations and villagers adjoining the Gibbon Wild Life Sanctuary by the Assam Forest Department. The forest department had conducted the primate census twice earlier in 1993 and 2000. There are seven primate species in the Assam state including the stump-tailed macaque, pig-tailed macaque, golden langur and the rare hoolock gibbon. The census will be conducted simultaneously all seven northeastern states. Photo: Ritu Raj Konwar