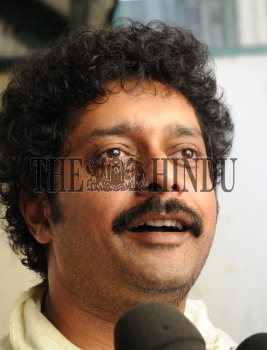 Caption : BANGALORE - 16/03/2009 : Film director Hemanth Hegde, at the office of the Deputy Commissioner of Police, Bangalore Central, to seek permission for the protest rally on 20th March, 2009, neaar the Gandhi Statue on M G road, in Bangalore on March 16, 2009. Hemanth Hegde who had planned the construction of the Charlie Chaplin's Statue at Ottinene near Udupi, stopped the work after the Hindu activists protested and warned him. Photo: K Murali Kumar.