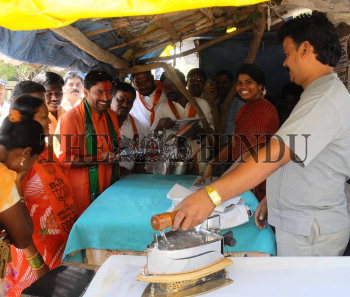 Caption : HYDERABAD,16/03/2009:BJP flag-bearer and partyās lone legislator G. Kishan Reddy knock electorate door during the election canvass at Bagh Amberpet under Himayatnagar Assembly Constituency in Hyderabad on March 16, 2009 after party fielded him again for second time from where he was elected in last general election with 31, 811 votes majority. Photo: Mohammed Yousuf