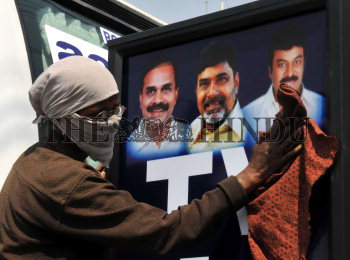 Caption : HYDERABAD,16/03/2009: A worker on the Masab Tank Road in Hyderabad cleans a election board of a television channel on March 16, 2009. The television channels in Andhra Pradesh are on a hot pursuit of TRPs and directly uplinking pre-election happenings of the main parties and their contenders who are to make it to the Chief Minister's chair in 2009 -- Y. S. Rajasekhara Reddy, N. Chandrababu Naidu and Chiranjeevi of the Congress, TDP and Praja Rajyam respectively . Day long capsules of rallies , roadshows and internal bickerings of the parties are sure to keep veiwers hooked to the political drama unfolding in AP Photo: P. V. Sivakumar