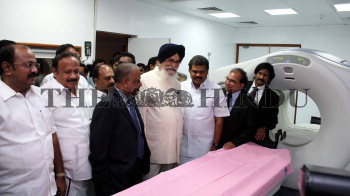 Caption : TAMBARAM,15/03/2009: Governor Surjit Singh Barnala at at a scan centre in Global Hospitals and Health City which he inaugurated in Perumbakkam near Tambaram on March 15, 2009.Others in the picture are (from left): Parithi Ilamvashithi, Information Minister, M.R.K.Panneerselvam, Minister for Health, T.M.Anbarasan, Minister for Labour Welfare, S.N.S.R.Sekar, Executive Director, Global Hospitals, G.K.Vasan, Union Minister of State for Statistics and Programme Implementation and K.Ravindranath, Chairman and Managing Director, Global Hospitals Group. Photo: A. Muralitharan. Story by K.Manikandan.