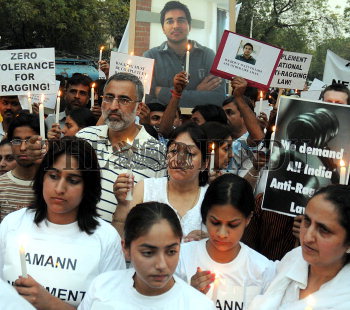 Caption : New Delhi, 14/03/2009: Family members and friends of Aman Kachroo during a candle light march to protest against ragging, at Jantar Mantar in New Delhi on March 14, 2009. Aman, a first year medical student of the Dr. Rajendra Prasad Government Medical College at Kangra in Himachal Pradesh, died recently after being allegedly ragged by his seniors. Photo: S. Subramanium