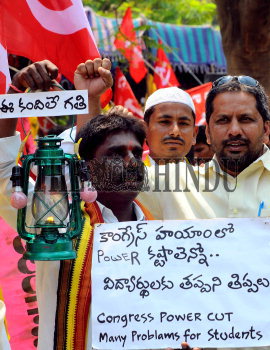 Caption : HYDERABAD14/03/2009:A Telugu Desam party activist carrying a placard and lantern during the grand alliances party dharna organized to protest against enforce six-hour daily power cut for industries in the state, in Hyderabad on March 14, 2009. Photo:Mohammed_Yousuf