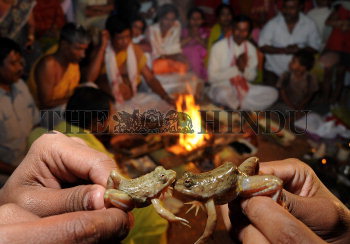 Caption : GUWAHATI 14-03-2009: (FROG MARRIAGE PRAYING FOR RAIN IN ASSAM) A frog marriage in progress at Sivmandir village in the heart of Guwahati city on March 13, 2009. The villagers solemnizing this marriage, pray to the Rain Gods for rain in the northeast India. Frog marriage is traditionally observed by the rural folks according to the Vedic rites and rituals to appease the Rain Gods to bring in rain. Prolonged dry spell in northeast region which has not witnessed a shower for several months has made life miserable for the people especially the farmers. Because of dry spell and poor irrigation system a large number of crop fields have dried up through out northeast region. In northeast India majority of the farmers are dependent on natural rain. The indigenous water supply methods which are used by the farmers are not sufficient to full fill the requirement. According to the meteorological department rains cannot be expected till the next couple of days in Assam state. PHOTO: RITU_RAJ_KONWAR