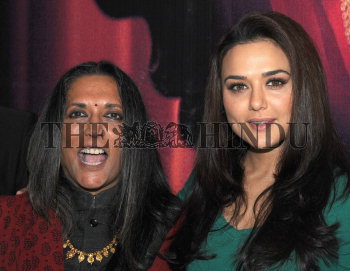 Caption : New Delhi: March 13, 2009: Director, Deepa Mehta and actress Preity Zinta during the launch of film, Videsh- Heaven on Earth , in New Delhi on Friday, March 13, 2009. Preity also unveiled the IIFA Bling for BIBA line which was specially designed for this film. Photo By Rajeev_Bhatt