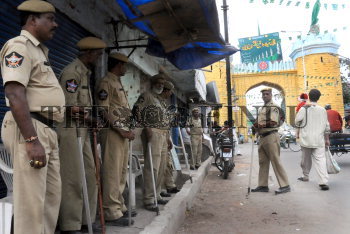 Caption : HYDERABAD,13/03/2009: ARMED POLICEmen keeping vigil, stationed near grand Dabeerpura Darwaza after being deployed at various places in the old city of Hyderabad on March 13, 2009, following the previous night's clashes between two sects of the Muslim community over the burning of effigies of religious heads prompting the POLICE to open fire in air to disperse the unruly mob, injuring 10 persons. Photo:Mohammed Yousuf