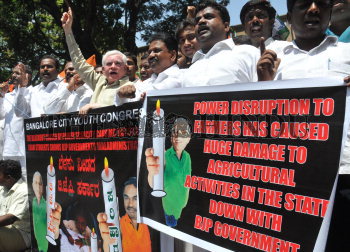 Caption : BANGALORE, 13/03/2009: Members of the Bangalore City Youth Congress staging a protest against the BJP Government on frequent power cuts in the State and the hardships faced by the farmers, in front of KPTCL Head Office, in Bangalore on March 13, 2009. Photo: V. Sreenivasa Murthy