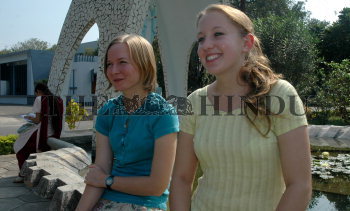 Caption : VIJAYAWADA: KATIE and Fiona who are volunteers of Project Trust, an educational charity involved in development of reading and writing skills in students of distant lands, during an interaction in Vijayawada on December 20, 2006. Nearly 200 such volunteers descended on India as part of the project in August on a yearlong visit. Fiona Paterson is from London, while her friend KATIE REVELL hails from Scotland, famous for its kilts, scotch and perfect English accent. Photo: V. Raju