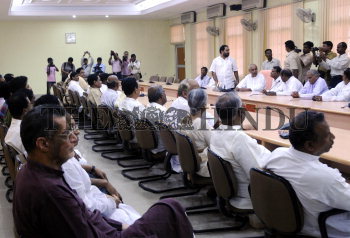 Caption : BHUBANESWAR,10/03/2009: Members of Legislative Assembly of BJD gathered in a meeting under the leadership of Chief Minister Naveen Patnaik in the Assembly house on the eve of floor test to prove the majority after the decade old BJP-BJD alliance collapsed, in Bhubaneswar on March 10, 2009. Photo: Ashoke Chakrabarty