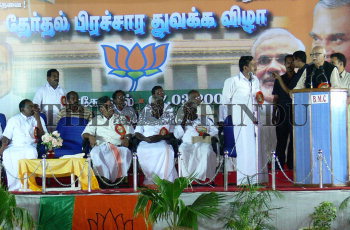 Caption : NAGERCOIL, 07/03/2009: Senior BJP leader L.K. Advani addressing at a meeting to kick off the Lok Sabha election campaign of the party, at Nagercoil on March 07, 2009. BJP candidate and former Union Minister Pon. Radhakrishnan is sitting at left. Photo: A. Shaikmohideen