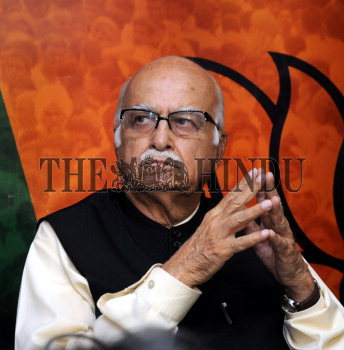 Caption : NEW DELHI, 05/03/2009: Senior BJP leader L.K. Advani at a Press conference in New Delhi on March 05, 2009. The opposition BJP announced a seat-sharing arrangement with the Asom Gana Parishad, saying it will contest eight of the 14 Lok Sabha seats in Assam while the regional party will field candidates in rest of the six constituencies. Photo: S. Subramanium