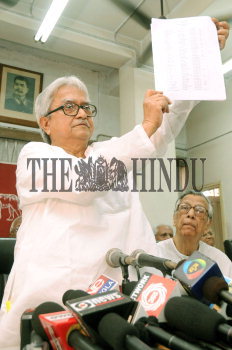 Caption : KOLKATA, 03/03/2009: Biman Bose, Chairman of the Left Front and state secretary of the Communist Party of India (Marxist) in West Bengal at the party headquarters in Kolkata on March 03, 2009, announced the list of the Left Front candidates in the state for the forthcoming parliament elections in the country. Photo: Arunangsu Roy Chowdhury