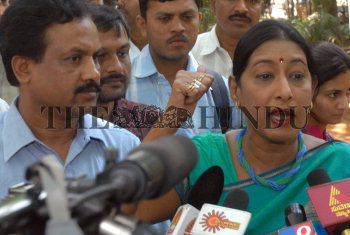 Caption : BANGALORE, 02/03/2009: Nirmala Venkatesh, former MLC and member, National Commission for Women (NCW) along with advocate Sreenivas, addresses the media, condemning her removal from NCW and rejection of her interim report on the Mangalore pub attack, at Bangalore Press Club in Bangalore on March 02, 2009. Photo: K. Gopinathan