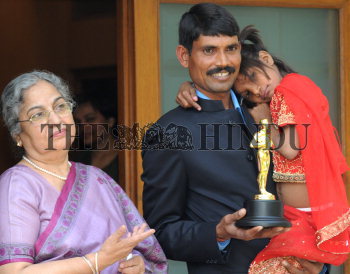 Caption : NEW DELHI, 27/02/2009: Pinki Sonkar, who is featured in an Oscar award-winning documentary film 'Smile Pinki', along with her father Rajendra Sonkar displaying a replica of Oscar Trophy, during their meeting with Gursharan Kaur, wife of Indian Prime Minister Manmohan Singh, in New Delhi on February 27, 2009. Megan Mylan's film "Smile Pinki", the story of six-year-old Pinki who becomes a social outcast because of a cleft lip, won the Oscar for best documentary film at the 81st Academy Awards on February 22, 2009. Photo: Rajeev Bhatt