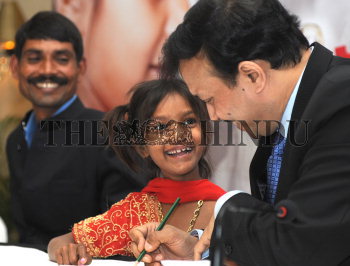 Caption : NEW DELHI, 27/02/2009: Pinki Sonkar, who is featured in an Oscar award-winning documentary film 'Smile Pinki', with Dr. Subodh Kumar Singh and her father Rajendra Sonkar during her felicitation function organised by "Smile Train", world's largest Cleft Charity Organisation which performed about 500000 surgeries worldwide, in New Delhi on February 27, 2009. Megan Mylan's film "Smile Pinki", the story of six-year-old Pinki who becomes a social outcast because of a cleft lip, won the Oscar for best documentary film at the 81st Academy Awards on February 22, 2009. Photo: Rajeev Bhatt