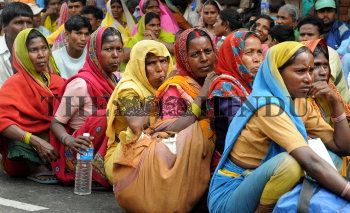 Caption : NEW DELHI, 24/02/2009: Woman activists at the 'Dalit Rights and Dignity Rally', organised by the National Confederation of Dalit Organisation (NACDOR), demanding the passing of the Schedule Castes and Schedule Tribes Bill 2008 with the suggested amendments in Lok Sabha or to scrap the Bill to ensure that their constitutional rights are not compromised, in New Delhi on February 24, 2009. Photo: S.Subramanium