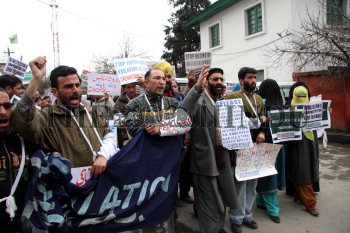 Caption : SRINAGAR, 23/02/2009: An activist belonging to the Jammu Kashmir Salvation Movement (JKSM) holds a placard during a protest in Srinagar on February 23, 2009. Dozens of activists from the JKSM staged a protest against human rights violations by security forces on Kashmiris and demanded the release of political separatist leaders kept in different jails. Photo: Nissar Ahmad