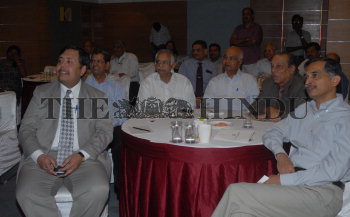 Caption : BANGALORE, 16/02/2009: BCIC President N. Upadhyay (third from left) along with other members watching the Interim Union Budget being presented in the Lok Sabha, on television in Bangalore on February 16, 2009. Photo: G.P. Sampath Kumar