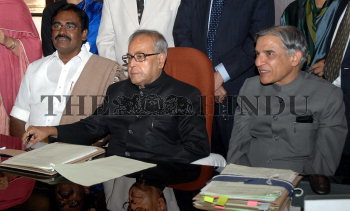 Caption : NEW DELHI, 15/02/2009: Finance Minister Pranab Mukherjee flanked by Union Ministers of State for Finance, Pawan Kumar Bansal (right) and S.S. Palanimanikkam (left) giving final touches to the Union Budget, which will be presented in the Parliament on February 16, at the Finance Ministry, in New Delhi on February 15, 2009. Photo: Shanker Chakravarty