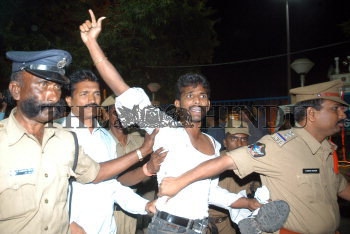 Caption : HYDERABAD, 14/02/2009: Activists of Telangana Jagruti being taken into custody by the police, for raising slogans, at the Nandi Awards presentation function for the film artistes, held at Lalitha Kala Thoranam in Hyderabad on February 14, 2009. The protest was against popular anchor and film actress Jhansi insulting the Telangana sentiment with her dialogues in the film 'Thulasi'. It may be recalled that Ms. Jhansi got the Best Comedienne Award for her work in the said movie. Photo: Nagara Gopal