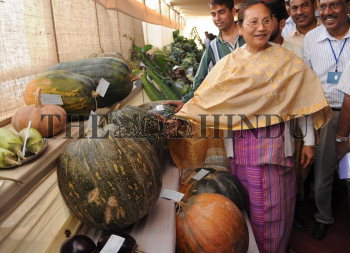 Caption : GUWAHATI, 11/02/2009: Assam Agriculture Minister Pramila Rani Brahma having a look at the pumpkins exhibited at the 'National Horti-Expo 2009' in Guwahati on February 11, 2009. In Assam, horticulture crops cover nearly 5.94 lakh hectare area with production of about 42 lakh tones annually. The National Expo will provide a platform for fruitful interaction among thousands of horticulturists, entrepreneurs and other interested groups and will also create an impetus to gather employment generation in the state. Photo: Ritu Raj Konwar