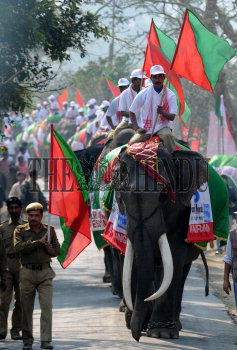 Caption : KAZIRANGA„10-02-2009 (7the ELEPHANT FESTIVAL IN KAZIRANGA) Decorated tuskers take part in an elephant procession on inaugural day of the 7th Kaziranga Elephant Festival in Kaziranga National Park 220 km away from Guwahati on Monday, February 10, 2009. Nearly 60 Asiatic elephants took from different parts of Assam state took part in this three day long biggest elephant festival of northeast India. The festival is organised to reduced men-elephant conflict. Assam is home to at least 5,500 which is more than half of the India's total elephant population of 10,000. Man-elephant conflict in Assam has intensified, with at least 100 people being trampled to death by the animals in the past year, as shrinking forests force the elephants to encroach on human settlements. Wildlife rangers said villagers had killed more than 210 elephants in Assam during the past seven years, some of them brought down by poison-tipped arrows. PHOTO: RITU_RAJ_KONWAR