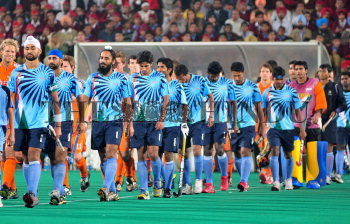 Caption : CHANDIGARH, 09/02/2009: Indian team enter the ground to take on The Netherlands in the finals at the four nation Punjab Gold Cup hockey tournament in Chandigarh on February 09 2009. Photo: Akhilesh_Kumar