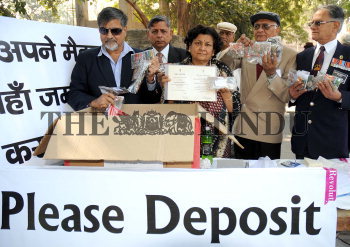 Caption : NEW DELHI, 08/02/2009: Ex-servicemen display their medals for distinguished service before returning them to the President during a rally to protest against the non-implementation of the 'One rank, One pay' principle in the Sixth Pay Commission, at Jantar Mantar in New Delhi on February 08, 2009. Photo: S. Subramanium