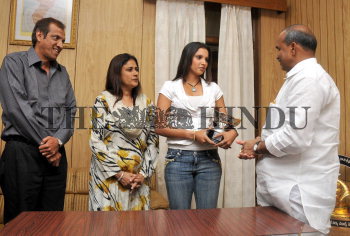 Caption : HYDERABAD, 04-02-2009: Tennis star Sania Mirza, who won the Grand Slam at the Australian Open, called on Andhra Pradesh Chief Minister Y.S. Rajasekhara Reddy with her parents Imran and Naseema in the Assembly in Hyderabad on February 04, 2009. Photo: P.V. Sivakumar