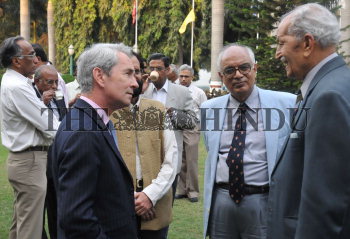 Caption : HYDERABAD, 02/02/2009: Sir Richard Stagg, British High Commissioner in India, interacting with Gen. (Retd) K.V. Krishna Rao at the Administrative Staff College of India, in Hyderabad on February 02, 2009, after delivering a talk on the ''Role of the Public Service in 21st Century''. Photo: P.V. Sivakumar