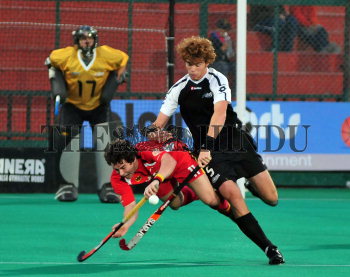 Caption : CHANDIGARH, 01/02/2009 Lietz Tobias of Germany and Andrew Hayward of New Zealand collided with each other during attempt to grab the attack during a match played between Germany and New Zealand during four nationâs Punjab Gold Cup tournament in Chandigarh on Sunday, February 01 2009. Photo: Akhilesh_Kumar