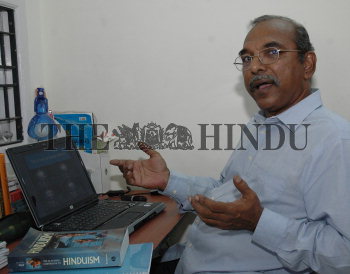 Caption : K. Jayabalan, during an interaction in Chennai on December 15, 2006. For K. Jayabalan from Singapore, the quest for education had him leaving the country he'd called home his whole life and living in a hostel in Chennai. Originally, Jayabalan came to Chennai with his son, planning to admit him to a college here. His son ended up going back to Singapore to study but Jayabalan stayed on, excited by the M.A. Philosophy programme at the Madras University. Photo: K.V. Srinivasan